Notepad++ is among the most popular text editors for programming. It comes with pre-installed color-coding schemes for a wide range of programming languages. With some effort you can create your own color scheme, or more conveniently, download and adapt an existing scheme. Below I adapt the markdown-scheme to display my personal color-coding for CHANGELOG.md files. I get the colors from my favourite color-picking site.

The pre-installed schemes can be easily adjusted in the style configurator under settings. 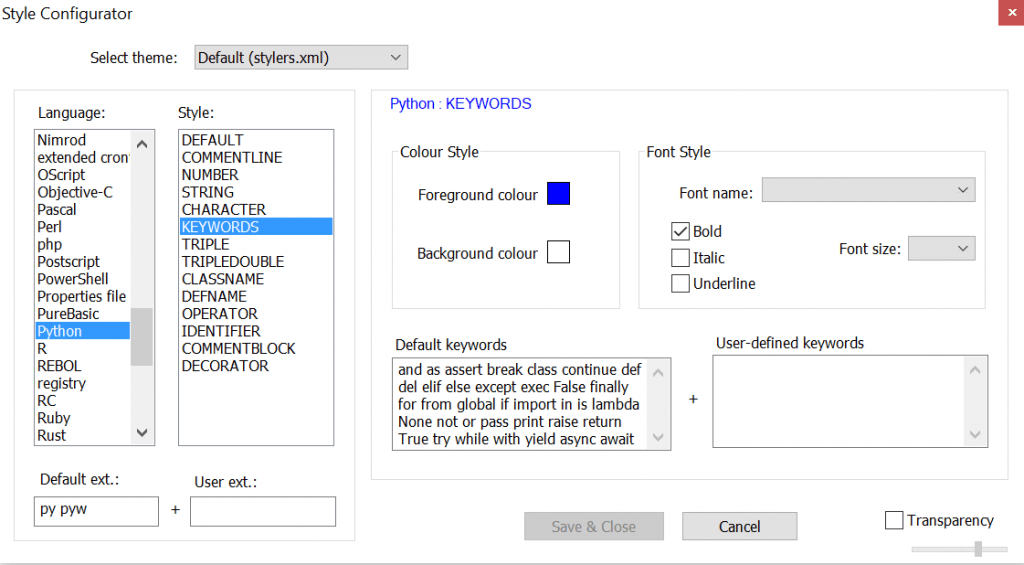 A bit more challenging is to adapt a scheme that can be downloaded and installed as user defined language. As an example I downloaded the xml-file with the color-scheme for markdown. The file can be imported in the ‘user define’-dialogue that is located in the language menu.

Once imported the new schema can be selected from the dropdown menu under ‘user language’, after which the dialogue will present additional options to ‘save as’, ‘rename’ or ‘remove’ the new language settings.

The interesting part is that the xml-file can be edited to adapt the color-coding scheme. For my purpose I was not primarely interested in the markdown settings, but intended to use the scheme for CHANGELOG.md files that I use to make notes while programming. After some experimentation I adpated 4 colors. I coded comments in green (#33AA33), numbers in red (#FF0000) and italic in a lighter shade of blue (0066AA). From userDefinedLang-markdown.default.modern.xml, I adapted the following lines:

I renamed the language to Markdown (My_Default), which now looks like this:

For me a convenient color-coding for my change logs, with the added bonus that the file will still render as regular markdown.